Sometimes I wonder if brands intentionally launch offensive campaigns for the PR. Are we as a society really that soulless? The conspiracy theorist inside me thinks so.

Firstly, let’s look at a recent tasteless campaign for context. A few months ago, Bud Light printed a slogan on their cans that suggested removing “no” from one’s vocabulary. The brand messaging is about having a good time, so at first this seems plausible. However, considering they sell an alcoholic beverage and their primary demographic is males 21 – 30 who are trying to pick up girls at a bar, and… you see where I’m going. People weren’t happy.

While at first it seems like an innocent mistake that somehow passed through several layers of approval before being printed on millions of cans, it also makes me think that perhaps there’s something else at work here– that perhaps there are marketing departments so clever and conniving, that they intentionally launch something offensive, knowing that people will give them the benefit of the doubt (all the while assuming that nobody would ever intentionally launch something that offensive) and shamelessly cashing in on the free, widespread PR.

I’m also pretty sure that the movie The Interview had some layer of PR genius behind it (the movie wasn’t that bad either). And Janet Jackson’s wardrobe malfunction during Superbowl XXXVIII? I’m sure she sold a few more albums after that.

Any other offensive marketing conspiracies you can think of?

I feel like building personas is a necessary step in marketing, but whatever result comes out of the process eventually gets swept under the rug. As marketers, we take the time to craft the perfect representation of who we believe is our target customer, give it a clever name using even cleverer alliteration (Engineer Ernie, Hipster Hal, etc.), share it with co-workers and then rarely (if ever) use it again.

What gives? I think there are three main issues that lead to this:

When you combine the subjectivity of its development with a lack of actionable next steps and no means to measure the success of the whole ordeal, it’s difficult to become motivated to create and consistently refine a persona.

Sure, we’ve filled out powerpoint templates and shared them around, but there’s got to be another way, right? Or maybe this is just a persona-l struggle (see what I did there?)

What do you do to show value in building a persona?

More often than not, the Internet’s social scene can be very similar to middle school. One embarrassing, unintentional slip-up can completely destroy any social competence you (or a brand) possessed. And the trolls are always ready to pounce on your blunder– they can smell it like a shark senses blood in the water.

However, the big difference between the Internet and middle school is that exponentially more people are watching, judging and sharing whatever mess you may be trying to snuff. So the stakes are much, much higher.

Whenever PR disaster strikes, I think the best people/companies play it cool and figure out a smooth way to redeem themselves. Take the Red Cross for example. A few years ago, an employee accidentally tweeted the following from the main Red Cross twitter account (she thought she was tweeting from her own account when in fact it was still connected to Red Cross): 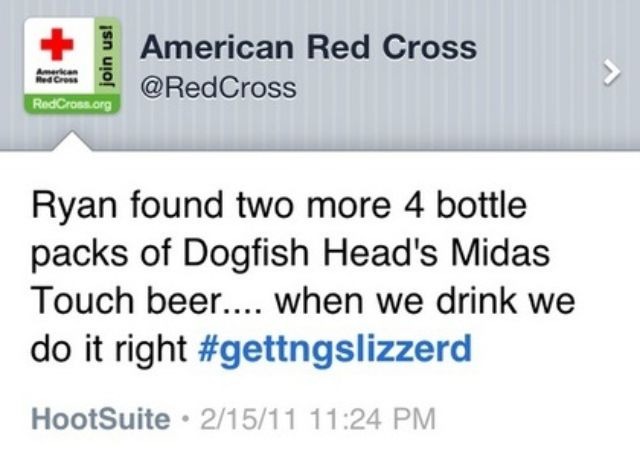 Not something you’d want tweeted on behalf of an employer who’s all about providing emergency assistance, disaster relief and education. Thankfully, they bottled it up quick and apologized.

I think the best brands are the ones that chime in and assist those that messed up (like Dogfish Head starting a campaign based on the hash tag to donate to the Red Cross). It’s kind of like that kid in middle school that sees you’re quite embarrassed for spilling your lunch all over your pants and offers you his extra pair of sweats. Yeah, that never happened.

I think we’ve all had “oh sh*t” moments in our careers, but only a select few of those came from when you actually thought you were doing something really awesome (which makes the fact that you screwed up even more painful).

The following story is true, but I’ve omitted the names of the companies (and the business they’re both in) so I don’t get any flak. Alright, here goes:

When I was working at an agency several years ago, one of our clients discovered that their primary competitor had mis-labeled one of their products and was falsely representing what they were selling to the public.

Our client, wanting to exploit this, asked that we create a smear campaign video and complementary social media campaign to raise awareness against this deliberate act of misconduct.

Well, we had quite some fun putting the campaign together. It involved me interviewing people on the street (think Michael Moore) and a supporting hashtag (it was pretty clever actually, in hindsight I was pretty proud of my wit) to call out the company for their mislabeled product.

We launched the campaign and within the hour got a cease and desist from the competitors legal team. After about ten minutes of shifting between panic and disappointment that we might need to scrap all our hard work, we pulled the video, severed ties with the client and had a whole mess to clean up.

We got so caught up in the cleverness of the campaign that we never considered the bloodbath that would ensue. To be honest, my gut always questioned the integrity of what we were doing, but I don’t regret it. They say any press is good press, amiright?